Hi all,
Not sure if this is the correct place, but besides the background colors which represents some edition of World Cup USA 1994, I'm also interested if someone here has a list of numbers and players per edition?
I understood that the numbers, depending on background color, can be different for the stickers.
If someone has a complete overview of the numbers and players for an edition, I would like to be informed. I'm collecting currently the Dutch- and International edition, but how the numbers/players are organised in other editions is unclear for me.

Maybe these links can help

Thanks gaspy. These links are certainly helpful and I'm aware of both sites, only these are applicable for the international edition I believe. I'm actually looking for the other non-international editions from Germany, France and other countries? I have seen stickers with purple-, green-, blue background?? Never see so far are the complete list of numbers with name of players/stadium, etc. for those editions.

Staff member
Contributor
Patron
This album is really a mess. The first one with so many different versions. But, Dude, this is Cardzreview : so you're finally have an answer !

Ok Makhno, wonderful. This is indeed information I'm looking for. Next is, do someone has for each edition the list of numbers with player names/stadiums/logos?
And which background color belongs to which edition? Phoe phoe...Thanks again!

take a look at this

Staff member
Contributor
Patron
Oh, yes : I forgot the mexican edition. Thanks @Danju
There is also a colombien edition. The back cover colors is coming. I have to check it but can't do it from where I am.

Great guys. Perfecto this. The link Danju sent is really helpful. Thanks thanks thanks!

Staff member
Contributor
Patron
I made a mistake with german and dutch edition (I have updated my last post for that).

* German edition have a center page with german stickers that won the 90's WC. The stickers are the same that in the World Cup Story album
* Dutch edition have a center page with dutch players but the stickers are taken from the former Panini Eredevisie album (players with their club shirt)
* In the Uk edition, 8 teams have zoomed pictures for all the players (Bolivia, Nigeria, Saudi Arabia, Cameroon, Spain, South Korea, Argentina, Morocco)
* In the brazilian edition, 4 brazilian players have different stickers (not the same pictures you find in the international edition) : Bebeto, Romario, Ricardo Rocha, Ricardo Gomes
* In the colombian edition, 2 badges are different (USA and Bolivia) and 1 player in the colombian team is not the same : Escobar (Colombian edition) VS Enrique Garcia (International edition)
* In the dutch and german editions, spanish players are with their club shirts
* In the mexican edition, the USA badge is different (same that the one in the colombian edition)

Contributor
mmm... something worst than Fifa365!! Great infos, I didn't know about and I've to check my copy at home ... there is something I never thought before. Maybe the human solution could be to have international one plus all different stickers ... and then just considering idea to find german and dutch edition ... one day ... maybe ...

Patron
to me one of the best collections ever, even due to all these variations

Staff member
Contributor
Patron
@Caniggia if you go to the first page of this thread you'll fine more details and pictures.

First of all , I want to salute everyone on this site ,moderators, members , visitors , contributors (you make a great job here).
I am Mircea from Romania I'm 48 now and I collecting albums from 1982.
My problem is... ...Did anyone notice that Abel Balbo sticker from Italia 90 album is the same with Abel Balbo from USA 94?
In my opinion...it's the same!!

Staff member
Contributor
Hi Mircea, welcome to our forum and thank you for the compliments, glad you liked

About the stickers, to me there are slight differences, Balbo in 94 seems to have the head more leaned to the left (his right)... But both pictures were taken in the same place, probably at the same time.

I did noticed there are two different USA 94 Balbo stickers: 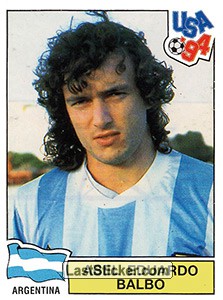 Yes , the head it's lean to the left.
But the picture was made in '90. That's what I want to said.
...pretty strange , did you know other "mistakes" of that type?

Staff member
Contributor
I don't know... Only noticed that when searched for Balbo stickers, but that's probably different USA 94 versions... There are users here with much more knowledge about this, maybe they can answer you better.

Staff member
Contributor
Patron
The two different versions for USA 94 are well known : the zoomed pictures (for all players of 8 teams) are from the UK & Eire edition.
It is obvious that the 2 Balbo's pictures were taken the same day. I guess Panini has a photo bank and can pick up in it when they have a problem to find a new one or better one. It must be as simple.
It also happened with the Andres Escobar stickers for the WC 90 album and the WC 94 album (colombian edition) : the shirt was photoshoped to change the colour and the picture has been reversed (look at the background).
I apologize for the bad quality for the second picture.