How to recognize an original sealed pack ?

It seems that the king of fake Chinese packets (mondo-panini) made a new victim at eBay.
Be careful of this person and don't buy those Chinese packets from him, he's printing his own labels.

I confirm that this is a 100% fake packet
As told in previous posts, the distributor became the Chinese agent of Panini since 2010, so a Chinese World Cup 2002 packet doesn't exist! 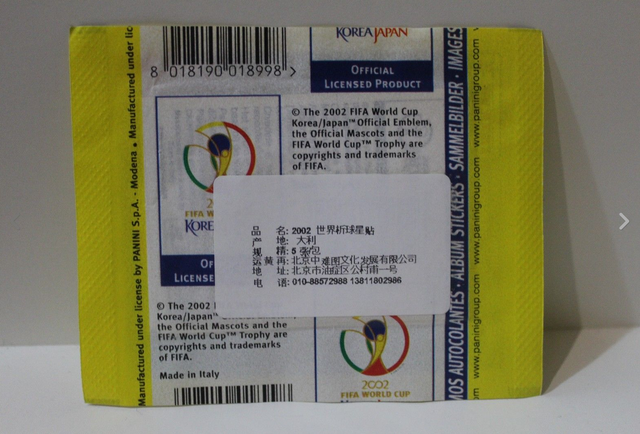 I want to develop the topic of sealed packets:

Whoever buys it deserve to be deceived. Every person with the tiny tiniest brain should realize a packet variation does not have some white label with gibberish. I can do the same easily.

ebay doesn't help too. Report the listing and you have tons of options to choose from, but I couldn't find any that is exactly what I want to report. This is not a counterfeit (product is legit, not the label though), this is not a fraudulent listing and surely not the other dozen of options.

We can say that an original Chinese EC12 pack does exist (see post here) and in the meantime I have such an original one in my collection.

dantzig said:
Whoever buys it deserve to be deceived. Every person with the tiny tiniest brain should realize a packet variation does not have some white label with gibberish. I can do the same easily.
Click to expand...

Except for the 2002 canadian packets?

Dieter said:
Except for the 2002 canadian packets?

That for me is not a variation, it's just Panini Canada stamping their label on a international packet.

Variation needs to have something unique IN the packet. Color, words, images, etc. Not labels.

I accept though if anyone also extends to these official labels. But not for me.

Unfortunately, buyers are still falling into the trap

It's very sad that this can go on...
This person even misuses the name of Panini.
Unbelievable

That seller must be blacklisted forever!

Some hours after my previous post here's already another victim

This is also an example of a self printed label.

The original label sticked on a EURO 2012 pakcet is much smaller, sharper and with correct Chinese typo.
An example of the original Chinese EURO 2012 version is posted before in this post.
Last edited: May 8, 2020

redwhite said:
That seller must be blacklisted forever!

This is also an example of a self printed label.

The original label sticked on a EURO 2012 pakcet is much smaller, sharper and with correct Chinese typo.
An example of the original Chinese EURO 2012 version is posted before in this post.
Click to expand...

I did my part:

It's only effective if many do the same. Ebay won't bother with my report if it's just me, but will bother if there's more reports.

Again, packets with labels are NOT variations. I can add my own label to some simple packet and say it's from a portuguese distributor or exclusive shop. It has to be printed by the publishers, which is Panini in this case.

I still abide by this:


dantzig said:
Whoever buys it deserve to be deceived. Every person with the tiny tiniest brain should realize a packet variation does not have some white label with gibberish.
Click to expand...

Hopelly it will be effective, this seller is now already the 2nd one with own printed labels. It seems the other seller is stopped with selling them.

or eBay user mondo-panini and mario29-6 are two accounts of the same seller. At least I see a lot of similarities between them.
Last edited: May 8, 2020

This guy is selling tons of fake Panini stuff. I bought several years ago "original" shields of West Germany and Brazil from the Mexico 70 collection. The paper was so thick and it was so evident that the images were printed that I immediately requested full reimbursement and product return. The guy did not accept this, said "everything he sells is original" and we ended up with me getting a fake product and him receiving negative feedback from me. I sent back then a long message to ebay explaining that fraud must be immediately punished, but I did not get a single line back. I had the feeling that they just want to collect their transaction fees and live happily thereafter. And this guy is selling quite a lot of stuff! My advice: stay away from him.

dantzig said:
I did my part:

It's a clear scam, I did the same

I didn't quite understand the discussion here. The packages are original but the seller put a Chinese label and sells it as a variation?

Teo Lahmeyer said:
I didn't quite understand the discussion here. The packages are original but the seller put a Chinese label and sells it as a variation?

Even the content or the design of the packs is the same, for the most packet collectors this is a variation.
You have to know that the distributor in China became the agent of Panini since 2010 and the coöperation stopped somewhere in 2018.
In that period Panini designed albums and packs with Chinese characters of some series, in other series labels were sticked separately on packets especially for the Chinese market. So at least it's impossible that there exist a 2002 packet with a Chinese label.
In fact you can compare it with Corfix, the distributor of Panini items in the Slovak and Czech Republic. There they reopen the original sealed boxes to stick labels on all the packs for their market and reseal the box again.

World Cup 2002 packets released in Canada has also sticked labels and is an exception because the design of the packs were the same but the content was different (blue backs and Irish players).

Now I can understand. I have seen many people with sealed boxes from the 1994 and 1998 editions. I always wonder if they are original or not. I can think it's normal for a person to have 1 box, but I start to suspect when he posts an image with 5, 6 boxes. It is a long time for this type of product to remain in these conditions.

Well, it is the opinion of a normal collector since at most I keep 1 package with the album. I believe that there are collectors who keep many items sealed as a long-term investment.
You must log in or register to reply here.